Life in the Fast Lane: Evolving Motor Culture in Vietnam

All photos by the author, Wesley Pinkham.

Traffic overwhelms the senses here in Vietnam. It’s the first truly mind-bending experience upon leaving the airport: the ways taxis weave in and out of lanes, the streets bursting with motorbikes, the huge trucks careening towards some construction project being completed at supersonic speed.

Motorbike culture is alive and well in Hanoi, where pages in most guidebooks are dedicated to explaining how to cross the street (walk confidently, at a slight angle towards your destination, and the traffic will morph around you). On one side trip, I met a marketing executive for Vespa in Vietnam. Just as I suspected, Vietnam is the largest international market for the iconic Italian scooter. “It’s a family heirloom,” she told me. “Vespa is a status symbol that you can take with you wherever you go.”

Yes, a motorbike is the preferred method to get around town, perch for a mid-day nap amongst shops, transport all five members of your family or deliver massive panes of glass across town… But for how much longer?

THE TIMES, THEY ARE A CHANGING 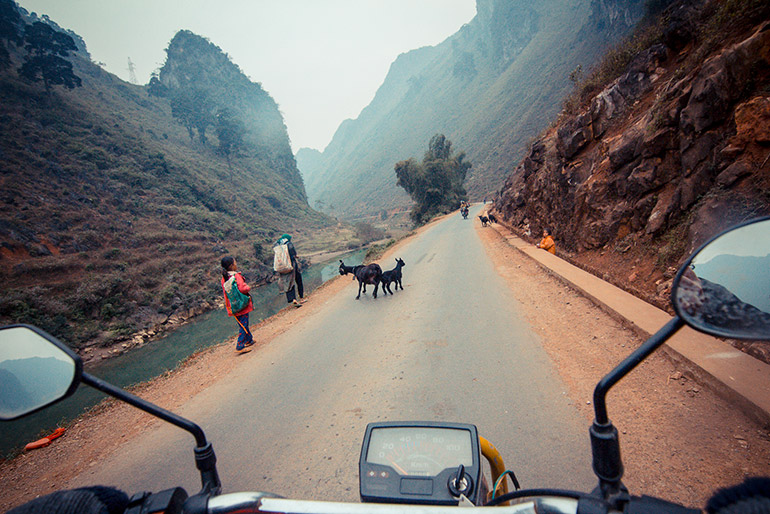 There's no shortage of juxtaposition, especially in the rural northern region of Ha Giang.

If Vespa has their eyes on the trends, though, they might be a little worried. Car ownership is on the rise here, despite heavy taxes and an almost absurdity behind owning a full-size vehicle in the crowded metropolises. I saw one car owner, in a sub-compact Kia New Morning (Picanto elsewhere), arrive at a friends’ house. After moving four parked motorbikes around, he was still parked covering half of the street, what we would consider an alleyway in the US. There was a strange glint of joy in his eye, having found a spot for his car, reveling in the status and freedom that come with car ownership.

If owning a Vespa is a status symbol, owning a car is so much more so. The comfort and convenience are important factors, but there are others: knowing your stuff is safe, staying out of the pounding summer rains or icy winter evenings exacerbated on a bike.

But then, there’s that special aspect of car ownership here: you completely stand out. Manufacturers in the States clamor amongst each other to define what’s different between brands. They need customers to switch from one brand to another. Here in Vietnam, perhaps it’s more like the early days of automotive marketing: manufacturers have to make the case for entirely switching to car ownership. If there weren’t such major bureaucratic and economic hurdles to the Vietnamese market, it would almost be romantic.

INSTANT INFRASTRUCTURE IS A TALL ORDER 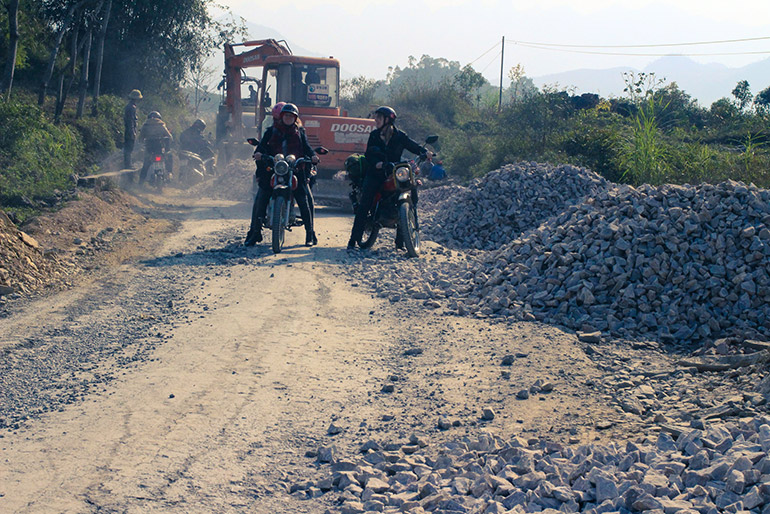 The only detour available: squeezing around the steamrollers. 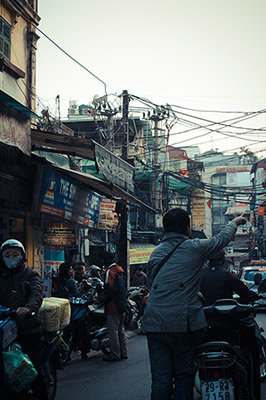 Despite the decades of focused growth in the Communist country, much of the core infrastructure in Hanoi remains lacking. Internet speeds are limited by a single cross-Pacific cable that is susceptible to Shark Attacks (really). Electrical grids are a criss-crossing patchwork of cables tied together with string. Power outages are regular, but they don't last too long.

The same can be said for vehicular infrastructure: it’s getting there but it’s got a long way to go. There aren’t nearly enough petrol stations in the city. The roads in many parts of the country require careful and deliberate navigation and long wait-times for single lane closures and construction. Pedestrians share the road with bicyclists who share the road with motorcyclists who are learning to share the road with subcompacts and huge work trucks. The bricolage of loose oversight in construction and permitting are a big surprise. I found myself thinking about that most recently, while riding across a few panes of sheet metal siding Macgyvered into a 10’ bridge.

With the rate at which trends catch on in Southeast Asia, the rise of cars here in Hanoi, dubbed “Carpocalypse,” is not a question of if, but when. The influx of vehicles will make motorbiking all the less convenient and more dangerous. More public services, including trains and subways, will be necessary to maintain quality of life in the Northern capital. Services such as parking, repair and filling stations will all need to be expanded. 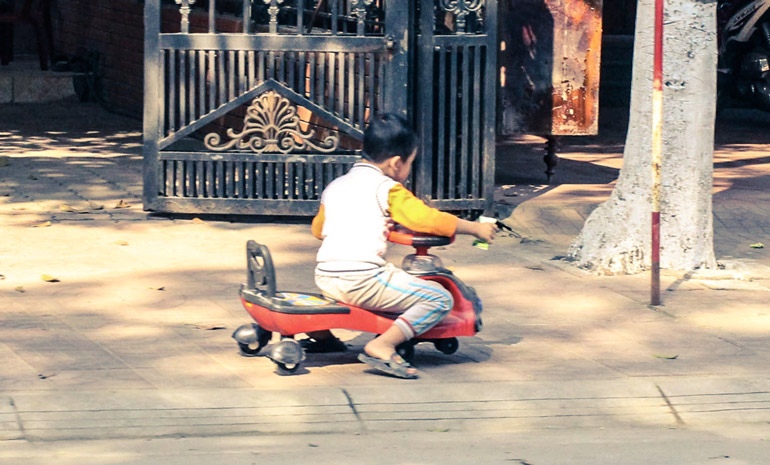 The average person in Vietnam is 27.4 years old and is likely to be married with kids (or kids on the way).

In addition to marketing to Vietnamese consumers, automotive manufacturers need to invest in building relationships within the government bureaucracy in order to implement the large-scale changes needed to truly build the automotive market. One advantage car companies can talk about at length would be a reduction in the noxious, overwhelming, urban pollution from dirty motorcycle smoke and the cleaner, healthier city, achievable through more efficient, catalytic converter-equipped vehicles.

The Vietnamese market will definitely be a unique learning opportunity for automakers. The demographics are incredibly young and eager, there’s a real sense of hope and growth and urbanism here. There’s no shame in consumption, either, especially if it can be justified as a convenience the whole family or an entire community can enjoy.

Creativity Pays Off Every Time